Singapore The Encyclopedia and The Certificate of Honour 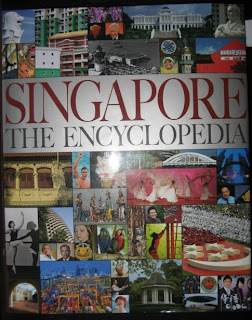 The book “Singapore The Encyclopedia” (ISBN 981-4155-63-2 by Editions Didier Millet and the National Heritage Board) contained some very important information on our country National Day Honours. In addition the book also listed the award recipients, both locals and foreigners, of some of our country highest honours. Such information was rarely published and not readily available. Therefore, to have all the award recipients since 1962 listed in a single book surely made this encyclopedia an extremely useful reference for those who are interested in Singapore Honours.

The following five Orders and Decoration and some of the recipients were:

The Order of Temasek has been awarded to 15 recipients since 1962, of whom 9 were foreigners and 6 were Singapore citizens (see Table 1). In 2007, Mr S. Dhanabalan (Chairman, Temasek Holding Pte Ltd) was awarded The Order of Temasek (2nd Class) and Mr Chan Sek Keong (Chief Justice Supreme Court) was awarded the same Order in 2008. The latest 2 recipients were not included in the book.
The Order of Nila Utama has been awarded to 10 recipients, of whom 1 was a foreigner and 9 were Singapore citizens. All 10 recipients were awarded on the same year in 1990, although the Order was instituted in 1975 (see Table 2). After  a duration of 16 years, the Order was awarded to Philip Yeo and Lim Siong Guan on 9 Aug 2006, Dr Andrew Chew Guan Khuan (Chairman, Public Service Commission) in 2008,  and Mr Joseph Yuvaraj Pillay (Chairman, Council of Presidential Advisers) latest 4 recipients were not included in the book

The book also listed the 36 recipients of The Distinguished Service Order (DSO) from 1963 till 2003, of which 4 of the recipients were foreign Inspector-General or Commissioner of Police. The complete list of recipients for the Meritorious Service Medal (MSM) from 1962 to 2005 was also listed.

The information I found most fascinating was on the Certificate of Honour (instituted in 1962 and revised in 1996, see Gazette below), because so far I have not come across any document which state that this Decoration has been awarded. Thus, I have always assumed that no Singaporean has ever been awarded. An extract from the book is as follows:

“National Day award instituted in 1962. It is fourth in the hierarchy of award. It consists of a scroll bearing Singapore’s Coat of Arms and the signature and seal of the President. Recipients are entitled to wear a silver badge known as the Badge of Honour. The Certificate has been awarded to only three people, all in 1962. Lim Hak Tai, the principle of Nanyang Academy of Fine Arts; Wong Peng Soon, the badminton player and Zubir Said, the composer.”

Wong Peng Soon was the undisputed badminton singles champion in Singapore and Malaya during his period, and was the first Asian to win the All England Championships (see picture). Zubir Said composed Singapore’s National Anthem, Majulah Singapura.

The original Certificate of Honour dated back to the colonial British era in the 1920s. It was meant to be awarded to chiefs and other non-Europeans dignitaries of the Empire for loyal and valuable service. Recipients of the Certificate were also awarded a badge (ie. The Badge of Honour). There were of two general types:

1. African (instituted in 1922), for British colony or protectorate in Africa, like Uganda, Swaziland and Tanganyika.

According to the Medal Yearbook, “… these awards appear to have been in abeyance since the early 1980s.” That is, former colonies of Great Britain that instituted the same award after their independences have not awarded this decoration for the past 25 years, as in the case of Singapore. The reason, I guessed, is because most countries have instituted other types of Orders, Decorations or Medals have served similar as the Certificate of Honour. For example, swimmer Joscelin Yeo was awarded The Meritorious Servive Medal (MSM) this year for her sporting achievements; while the Cultural Medallion was awarded to Singaporeans to honour major contributions by artist in various fields. In a sense, The Certificate of Honour has no or limited purpose these days and can be taken out of our National Day Honours permanently.

Singapore The Encyclopedia has provided Singapore medal and history enthusiasts a valuable source of information. The only regret is that it did not contained any information or recipients of The Conspicuous Gallantry Medal, or The Medal of Valor. Recipients of these medals had made great sacrifices for our country and certainly their contributions need to be recorded in this great book.

Recipients of The Order of Temasek

Recipients of The Order of Nila Utama